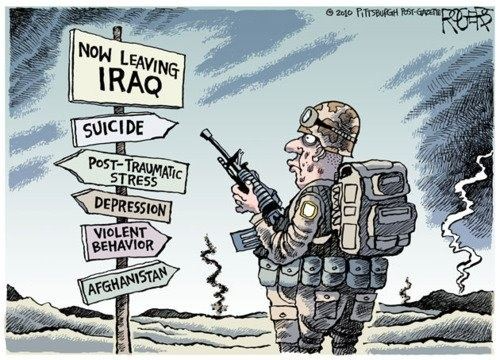 Freelance medical writer, Miriam Reisman, engages the multifaceted issue of PTSD in veterans in this thorough, succinct article. Although this piece was published in 2016, we feel it is highly relevant today. Reisman elucidates core issues concerning veterans and PTSD in her introduction, where she states:

"The last several years have seen a dramatic increase in the number of Iraq and Afghanistan war veterans seeking help for PTSD, shining a spotlight on this debilitating condition and raising critical questions about appropriate treatment options and barriers to care.

While PTSD extends far beyond the military—affecting about eight million American adults in a given year—the problem is especially acute among war veterans. Not only are recent veterans at higher risk of suffering from PTSD than those in the general population, they also face unique barriers to accessing adequate treatment. These include the requirement that they have either an honorable or general discharge to access Department of Veterans Affairs (VA) medical benefits, long waiting lists at VA medical centers, and the social stigma associated with mental illness within military communities. According to a study conducted by the RAND Center for Military Health Policy Research, less than half of returning veterans needing mental health services receive any treatment at all, and of those receiving treatment for PTSD and major depression, less than one-third are receiving evidence-based care."

We are appreciative of researchers such as Reisman, who so articulately and passionately unearth and communicate the realities that veterans who struggle with PTSD face. We have attached the article below if you are interested in diving into any of its number of interesting topics, such as nonpharmacological treatment of PTSD in veterans, including the ever-so-fascinating eye-movement desensitization and reprocessing, or EMDR, the potential to combine pharmacotherapy and psychotherapy, the economic and societal burden of PTSD, PTSD and suicide and last, community-based PTSD care.